Last week, IVN published the results of its own presidential poll. But unlike traditional polls that restrict respondents to choosing only one option, this poll used approval voting. Approval voting removes the arbitrary choose-one restriction of our most common voting method, plurality voting. Respondents for this poll could choose as many candidates as they wanted.

There are some issues with the polling. One is the sample used for the poll, which was done using IVN readers and not the general population. Albeit, there is interest in knowing what independent-minded voters tend to think. Secondly, IVN did not do a simultaneous choose-one poll for comparison, which would have been interesting.

Author Caitlin Hurkes indicated the main findings along with more detailed demographics. Below are the results: 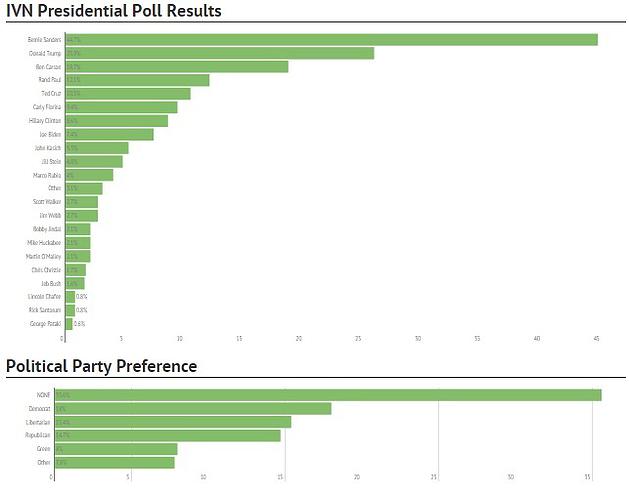 IVN readers had a strong preference for Bernie Sanders and Donald Trump. Just as traditional choose-one polls show, this is an interesting field.

Sanders is not a traditional Democrat. Neither Trump nor Carson have held office before. And Rand Paul is not a traditional Republican. One has to get down to the number five spot to Ted Cruz to find a candidate that is both mainstream within the party and has held an elected office.
Clinton also did poorly in this poll with less than 10% approval.

Sanders likely benefited from this style of poll. He was on the two most popular ballots that approved multiple candidates: one paired with Clinton and the other with Biden. Trump may have also benefited. Of course, without a comparison choose-one poll, it’s difficult to know if the vote would have otherwise gone all to Sanders, Trump, or some other candidate.

About 65% of voters only chose one candidate with the remainder 35% choosing two or more. For many people, being able to choose just one is good enough. But it’s essential that those preferring multiple candidates be able to say so.

Limiting those 35% of respondents to one candidate when they would have otherwise chosen more is far from trivial and can substantially change the results. This would cause the vote to arbitrarily divide between similar candidates and distort their support.

Further, a choose-one approach would cause respondents to focus on electability rather than the candidates themselves. Viability is never an issue when deciding whether to approve your favorite candidate in approval voting.

Like many polls, this poll did not include declared Democratic candidate Lawrence Lessig, but did include Joe Biden—who still hasn’t declared his candidacy.

The poll was also light on third-party candidates with Jill Stein of the Green Party being the only one on the list. That she was under 5% in an approval poll with an independent-minded sample is probably not a good sign. It’s also probably not a good sign for the slate of Republicans and Democrats—including Bush and Clinton—who polled under 10%.

Note that the Green Party has five declared candidates as does the Libertarian. (Gary Johnson has yet to declare.) Going through all the independents and other parties in a poll may begin to get overwhelming, but on the bright side, approval voting is probably the easiest voting method for voters when there are so many options.

It’s encouraging to see IVN use an approval voting poll. But particularly when the poll is of a specific population—here being IVN readers—having a comparison plurality poll is helpful. It’s that kind of contrast that lets people know how much the voting method matters, as it clearly does. Let’s hope that other pollsters follow IVN’s example in using approval voting to complement and contrast with traditional plurality polls.

Special thanks to Brian Goldman, William Waugh, and Nevin Brackett-Rozinsky for additional data compilation. Any errors belong to the author.