Time to get out the approval vote

Two weeks before midterm elections, and the air at Politicon was buzzing with the same energy as our current political climate: a mixture of excitement and hostility, hope and anxiety. Politicon describes itself as an “unconventional political convention” where politicians, media personalities, and entertainers of all political stripes come together for political discourse. When you have people from all sides of the aisle coming together in one place, there are both moments of bridge-building and moments of trench-digging. 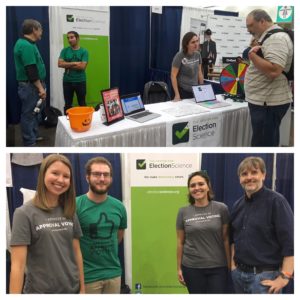 Over at The Center for Election Science booth, we were striving to be bridge-builders. We weren’t there to argue one way or another on any political or policy issue—we just wanted to raise awareness of approval voting. Four amazing volunteers joined us, helping staff the booth. Their enthusiasm and passion for better voting methods was an inspiration, and it helped us convert many Politicon attendees into approval voting believers.

From Trump supporters to Bernie Sanders enthusiasts and Green Party members to Independents, we talked to individuals across the political spectrum about approval voting and how it could reshape our democracy. Two common concerns we heard were that (1) politics has become too divisive, and (2) there’s no room for candidates or ideas outside the two-party establishment. Fortunately for us, approval voting is a major step toward curing both of these political ills. And the most common response we got after explaining the benefits of approval voting… “That makes a lot of sense!”

We also gave attendees the chance to see how approval voting works by participating in a fun, Politicon-themed poll: who is your favorite celebrity-turned-politician? It was a close race, but Jesse Ventura, former pro-wrestler and former Governor of Minnesota, beat former Governor of California Arnold Schwarzenegger by one vote.

The results of this poll are symbolic of what approval voting could do for our elections. Ventura has identified as a member of several different third-parties, winning his race for governor as a member of the Reform Party. Approval voting would help break up the two-party establishment, giving more Independents, third-parties, and outsiders—like Ventura—a real chance at winning. 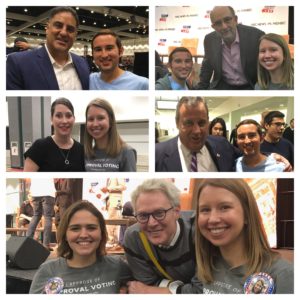 Politicon draws lots of big names, and luckily for us, that meant that we got to pitch approval voting to individuals with major platforms. CES staff members Kirsten and Caitlyn met Clay Aiken, the former American Idol contestant and congressional candidate. He had never heard of approval voting but had lots of intelligent questions about it. Among the other political and media figures our staff and volunteers met were New Jersey Governor Chris Christie, Cenk Uygur of The Young Turks, Kentucky Secretary of State Alison Lundergan Grimes, and actors Richard Schiff and Josh Malina of The West Wing.

I’d also like to shine a light on the other organizations Politicon hosted who are doing great work to improve US politics and democracy. The folks at Voterfied have developed an app that uses blockchain voting to allow constituents to provide feedback to their representatives on specific issues. In a similar vein, Vote Matrix is a platform that provides users with personalized information about candidates based on issues and values selected by the user. In an effort to increase voter turnout, We’re the People is dedicated to educating voters and mobilizing them to encourage friends and family to make it to the polls. As a nonpartisan organization dedicated to creating a more representative democracy, it was heartening for us at CES to see these organizations without a political agenda who are also committed to empowering voters and improving elections. 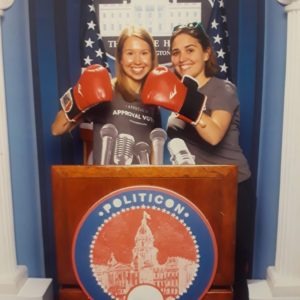 A common theme I picked up on at Politicon was that of empowering the electorate. Panelists railed against the kind of political corruption that caters to an elite few. Organizations like the ones above sought different ways to equip voters with the tools they need to be effective political actors. And attendees bemoaned a political system where they feel their voice is not being heard. While there are many paths toward empowering voters and improving our political climate, enacting better voting methods is one of the most effective changes we can make. Approval voting gives voters more agency to express their full opinion and always vote for their honest favorite, resulting in greater overall voter satisfaction and elected officials who truly represent the will of the people. Let’s work together to make approval voting—and empowered voters—a reality. 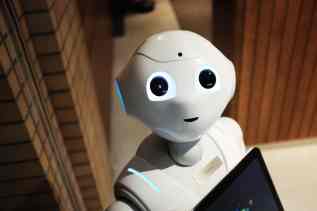 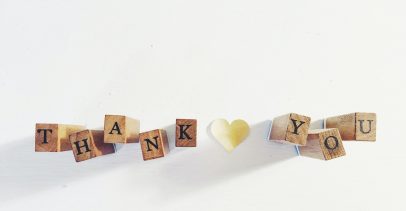