A weekend of approval voting campaign activities in fargo

Last weekend, I had the pleasure of hosting Aaron Hamlin and Caitlyn Alley Peña of the Center for Election Science on their first trip to North Dakota. They came to check out Fargo and to support the work of Reform Fargo, the local volunteer coalition bringing approval voting to the city. 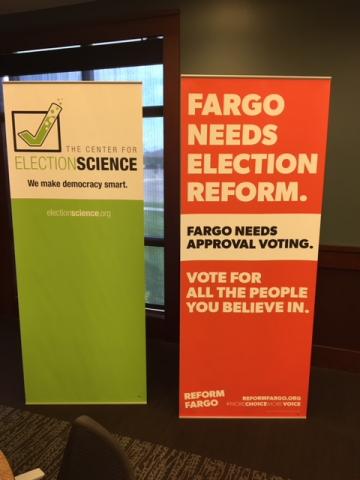 The weekend started off with an approval voting public forum on Friday night. It featured Fargo city commissioner John Strand, Reform Fargo’s Jed Limke, and our own Aaron Hamlin. The panel gave presentations and took questions from the public regarding the possible change to approval voting in upcoming city elections. There was a strong turnout including state legislators living in Fargo, legislative candidates, and many local activists. The crowd seemed to span the political spectrum and asked astute questions. We really appreciated the ideological diversity of those who showed up and everyone’s willingness to participate in invigorating discourse! To our pleasant surprise, everyone stayed for over two hours, keeping the conversation going. It’s exciting to see how engaged the community is on the issue of approval voting! 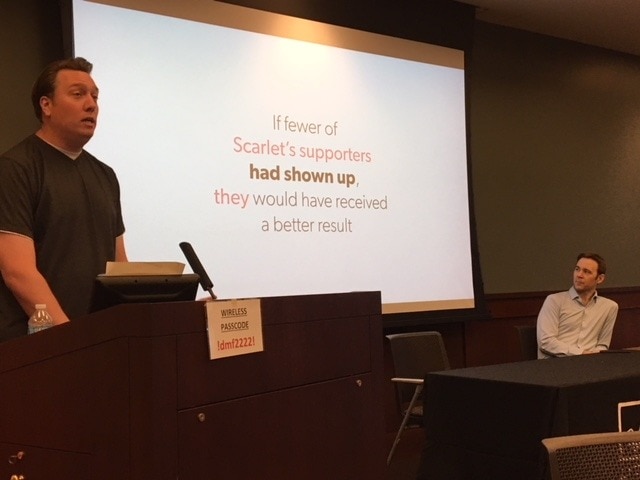 The next day we met with John Pudner, Executive Director of Take Back Our Republic, at an event hosted by Represent.US. Mr. Pudner shared some great insight on the degradation of transparency and accessibility in government. We enjoyed the opportunity to speak with him about the approval voting initiative happening in Fargo, and he was interested to learn more. Mr. Pudner tours nationally speaking about corruption in politics from a conservative point of view. We are glad that he was receptive to approval voting and understood its role in a fair government. 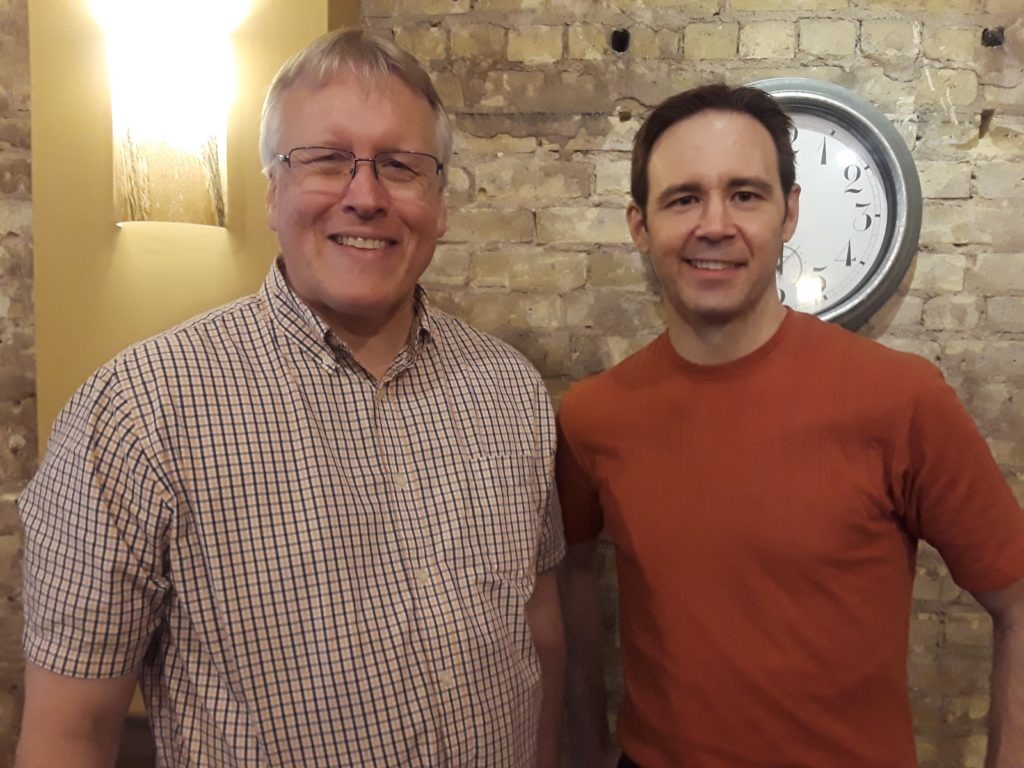 We spent Sunday afternoon tabling at StreetsAlive!, a community advocacy event that attracts 8,000 people to take to the streets on their bikes or on foot. Here, we had the opportunity to talk with residents of Fargo about approval voting and educate them on the ballot initiative. Again, we were energized by the friendly and inquisitive nature of all the folks who stopped by our booth to chat. 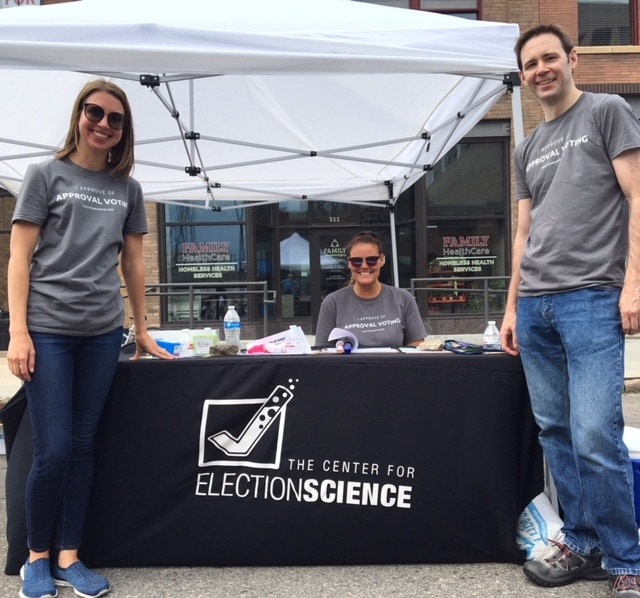 Being a North Dakota native myself, I was proud to show off our most charming and fair city! We took the obligatory photo in front of the iconic Fargo Theater marquis. We had to stop by Hotel Donaldson — an institution in downtown Fargo — and try the food (everyone loved it!). Additionally, Caitlyn loved her first taste of Knoephla soup, a Fargo staple, at Würst. 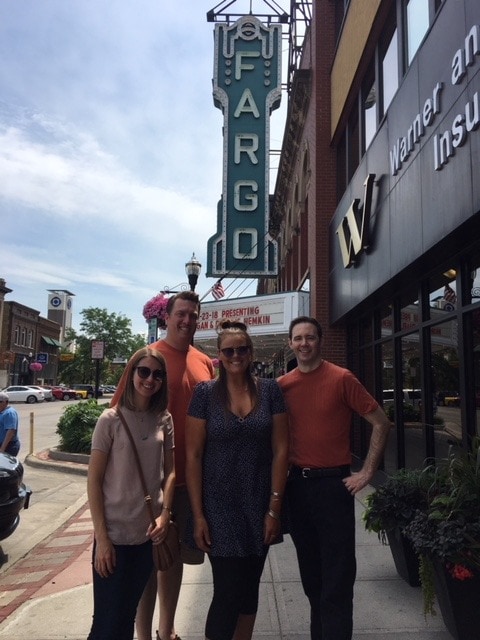 Before heading to the airport to get Aaron and Caitlyn on their flights home, we made a couple of last-minute stops. We dropped by the KFGO studio for Aaron’s radio interview with Amy & JJ of “It Takes Two.” The interview is available on their podcast — give it a listen! Last but not least we had to stop by the visitor’s center, as it is home to THE wood chipper. You know the one. 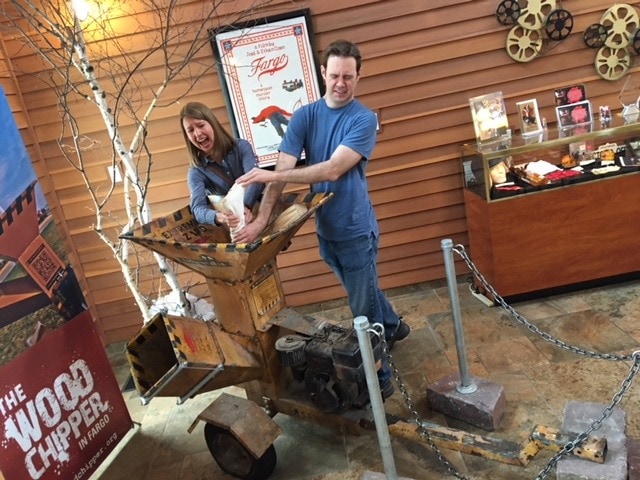 Andrea Denault is from Larimore North Dakota and lives in Fargo. She is the Fargo Education Campaign Coordinator for the Center for Election Science.

ABOUT THE AUTHOR
n 2018, Andrea organized Fargo’s campaign to adopt approval voting, making it the first city in the U.S. to employ the method. Her current role with The Center for Election Science is to grow national chapters, advise organizers on strategy, and secure more wins nationwide. Her background is in market research, human rights, and legislative advocacy with an emphasis on indigenous causes (she is an Anishinaabe descendent of the Turtle Mountain Chippewa). Andrea is an internationally trained Yoga instructor, a fervid road tripper, and hopes to settle down in rural North Dakota learning the art of beekeeping, pollinator gardening, and prairie restoration.
previous POST Next POST